A young man asked me this week how to be a better husband. As we talked, we bemoaned how an entire generation is rapidly losing the art of gender.

The Apostle Paul can help us. He finds his second great gender asymmetry (of three) in his reading of the Genesis 2 story of the creation of Adam and Eve. In treating masculinity and femininity on display in marriage, he points out as important that the one was “made from” the other (1Corinthians11:8). 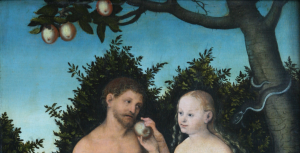 This asymmetry of origin, he says, is why married women who pray or prophesy in first century Roman cultural Christian worship should wear head coverings. Paul summarizes his asymmetries with the word “head” (v2). Interestingly, this second gender meaning corresponds to one of the three possible meanings of head, that of source, as in the head of a river.

Somehow, their being made differently forms the reason that they behave differently toward each other in close relationship like marriage. If we try to follow Paul’s thought into Moses’ account, what do we find of their individual origins? How does that inform what they give to each other? And how do we learn how to love one another therefrom?

Adam’s experience shows us how the way Eve was made does something to him. Her story begins with his profound rest (Genesis 2:18, 21). The sleep God puts the man to is translated, in the Greek LXX version of Genesis, is ἔκστασις, from which we get our English word, “ecstasy.” This profound rest God wrenches from the man when He does an operation on the man and removes his rib (v22). When his substance returns to him in the form of Eve, He utters an expression of relief: “At last!” (v23). She brings him back to rest.

The idea of rest-giving expands further in Adam’s choice of a name for the woman: “Adam named his wife Eve, because she would become the mother of all the living” (Genesis 3:20). The Hebrew word, “‎חַוָּ֑ה  ” (chavo/ah) sounds like the Hebrew for life-giver and resembles the word for living. The word also has secondary connotations of farmstead or small village (Brown, Driver, Briggs) or even tent-dweller (Koehler-Baumgartner). She is life giver and makes a place for life.

On the other hand, Eve’s experience shows how the way Adam was made does something to her. She arrives second to the party, fresh and unsure. She never speaks in the account, which is significant because she certainly could. Instead, Adam interprets the meeting for them. The first thing he does, after his exclamation, is secure her with a name (v23). He does this by making his name the root of hers. Our English gender words work like the Hebrew in this regard: Man is ‎אִישׁ  (ish). Woman is ‎אִשָּׁה  (ishah). Her root is in the man. He assures her that she is of His same substance, elevating her to know herself. He thus grounds her. Later he will vanquish the evils against her. Again, the man’s personal name reflects what He is to her: Adam means ground or earth.

Paul’s asymmetry of origin here explains why the Bible in different places emphasizes the wife’s hearth focus. Proverbs 31:10-31 (OT) and Titus 2:5 (NT) call wives to home-making as a way to make a place of rest for their husbands. It is also why we see men in relationship to women called to securing activities for them (e.g., Deuteronomy 24:5, Ruth 2, Acts 6:1-7, Ephesians 5:26-27, 1Peter 3:7). Of course, how this happens in marriage differs with each couple, for there are many ways to secure and give rest. But this is how the different genders love each other in close relationship. So it points the way for us to be better husbands and wives.

To one another, they are the He of the Solid Ground & She of the Resting Rib.