Among the many excellent displays in the excellent Museum of the Bible, recently opened in Washington D.C., one may find a curiosity on the museum’s the floor devoted to the impact the Bible has had on human history. The exhibits shows “The 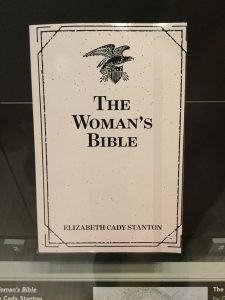 Woman’s Bible” (TWB), created in 1895 by Elizabeth Cady Stanton, a leading suffrage advocate. Ms. Stanton’s aim was to elevate the status of women and, strangely, she saw the Bible as a prime enemy of that goal. As she famously wrote of the Biblical accounts, “I know no other books that so fully teach the subjection and degradation of woman.”

This, even though, throughout history, Biblical writers contradicted their cultural norms in elevating women. As I documented in enGendered, the Bible consistently preaches against the denigration of women. And even in TWB, Ms. Stanton provided commentary to emphasize the equality of the genders, a worthy effort with plenty of Scriptural support. Her book became a best-seller.

However TWB commentary shows itself to be one more example of how people err in missing one of the two balancing principles of the gift of gender in relationship. We either miss the equality of the genders or their asymmetry. The museum exhibit rightly notes how some clergy wrongly quoted the Bible to try to justify women’s subservient status but, on the other hand, Ms. Stanton lands herself squarely in the camp of neglecting the latter. 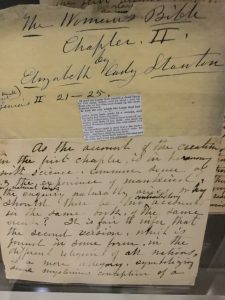 A prime example is Ms. Stanton treatment of the first two chapters of Genesis. She likes Genesis 1, of course, because from the beginning women and men are created as fundamentally equal, both cited as made in God’s image. But she all but dismisses chapter two as mysterious allegory, contradicting science, experience and common sense. This is because Genesis 2 tells the story of gender asymmetry, there also from the beginning. There Adam names Eve, represents Eve, leads in their mission and is returned to rest by Eve. There Eve is made from Adam, is secured by his words and arises to power the mission. Ms. Stanton has no use for such differences.

There you have it, the sad history of error in handling the gift, muffing either one or the other. Some embrace Genesis 1 (gender equality) and ignore Genesis 2 (asymmetry). Others trumpet Genesis 2 and remain stubbornly deaf to Genesis 1.

But not all. Other influential suffrage advocates, like Frances Willard, head of the Woman’s Christian Temperance Union at the time, spoke against Stanton’s re-interpretation of the Bible. Ms. Willard sought to maintain women’s distinction, and so rejected Ms. Stanton’s lopsided hermeneutic.

What about you? Can you embrace both Genesis 1 and Genesis 2?