A thoughtful pastor recently asked me, where is this gender teaching of yours in the Westminster Confession of Faith? As a Presbyterian minister, isn’t that your doctrinal standard?  So shouldn’t you be deriving your doctrine with 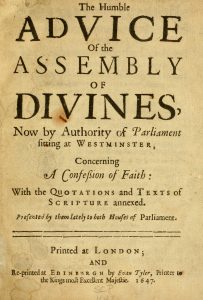 reference to it? It is a good question. It might be re-phrased:

Where is gender in the confessional standards of the Christian Church?

The short answer to why I don’t quote or reference the Protestant confessions or ecumenical creeds much in speaking about gender is that there is not a lot there to quote. The Church Fathers and Reformers did not address the masculine-feminine distinction in humanity and were not intending to. It was not a question that their culture at the time was raising very much. The questions have always been there, simmering, but were not a focus demanded by their context. In contrast, things like who exactly Christ was, what Christ did, and what the Holy Spirit now does, or the nature of salvation in the Christian life, certainly were. These latter were needed topics to address in the times the doctors of the church composed those affirmations. And good thing too, for those topics are more foundational to the Christian life. Understanding God and Christ and salvation, we could say, are necessary precedents to understanding ourselves. 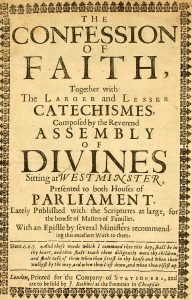 Yet we may also say that the seeds of a Biblical understanding of gender are there in the standards. Besides the confessions of God as Trinity (some of which I actually do find myself quoting frequently on gender), we can espy in the standards a framework upon which a theology of gender can be built.

For example, the Westminster shorter catechism question #10 asks, “How did God create man?” and answers, “God created man male and female, after his own image, in knowledge, righteousness, and holiness, with dominion over the creatures.” Now, in speaking about gender and the image of God, I often outline the different understandings through history that theologians have given for our being made “in the image of God.” Painting with broad brush, these amount to three: 1) having the attributes of God, like knowledge and righteousness, 2) called and enabled to take dominion over the earth and its creatures, as highlighted in God’s command after creating people in His image (Genesis 1:26, 28), and 3) being made for relationship (like the Trinity), as highlighted in the creation sentence of being made “male and female” (Genesis 1:27). 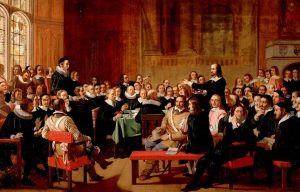 features in its answer to “How did God create man?” Each phrase of the “after his own image” answer may be expanded into one of these three categories, ‘male and female’ (#3), ‘in knowledge, etc.’ (#1), and ‘with dominion etc.’ (#2).  The Westminster standards wisely, or more wisely than the framers knew, included all the possible ways the church has come to read Genesis 1:27.

And do you note that the gender emphasis, “male and female”, comes first?