The same year enGendered was published (2015), Rosaria Champagne Butterfield released Openness Unhindered: Further Thoughts of an Unlikely Convert on Sexual Identity and Union with Christ. I want AffirmingGender readers to know of this work.

This sequel to her first Christian book opens with further reflections on her conversion. As she goes on, Dr. Butterfield gives us a refreshing re-casting of sexual issues in Biblical categories, as illuminated by 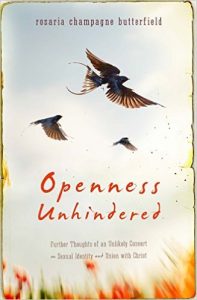 Puritan writing. In this vein, she reminds us of, and applies to the problem, the reality of original sin, the force of justification and the process of sanctification.

Some of the best lines in these chapters offer correctives to the way we as Christians slip into talking: “Sin is treason, not sinus trouble. God forgives sin; He does not heal sin” (p55). “John Owen says it best: ‘The knowledge of a proud man is the throne of Satan in his mind’” (p75). And there was one sentence about her gaining a consciousness about hell that reminded me of one of my recent posts, “The image of me and everyone I loved suffering in hell crashed over me like shark-infested waves of a raging sea. Suffering in hell not because we were gay, but because we were proud. We wanted to be autonomous. It was our hearts first, and our bodies followed. I got it. I heard it. Finally” (p23).

But it is in Chapter 4 that Dr. Butterfield really shines. She swings into gear as English professor specializing in the 19th Century. Making good use of the Oxford English Dictionary and a very helpful 2014 article by Michael W Hannon in “First Things,” which challenged the very concepts of “heterosexuality” and “homosexuality,” she forcefully argues against the term “sexual orientation.” Hannon’s article was a little bit before its time and so did not have nearly the influence it deserved to have back then, so it is great for Dr. Butterfield to revive it in her work. Going back to Freud and Romanticism, she shows the assumptions and beliefs smuggled in with this term. And in Chapter 5, she similarly highlights the harms in adopting the term, “gay Christian.”

Dr. Butterfield doesn’t believe in just giving you some of herself–it must be ALL of herself. People discovered that about her in her first book—you may have liked her testimony of conversion to Christ and to a new sexuality. But you were going to hear her strong views on homeschooling also. Some said, 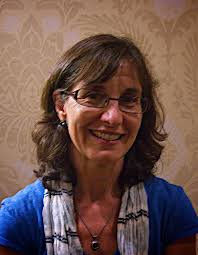 “the book would have been better if she left the end part out,” but that would be a mistake. Her new life, with all of its particular expressions, is what makes her tick. Education burned her. Now a new education is her crusade.

So the same thing happens in this book. You might thrill to her critique of sexual orientation. But you are also going to have to hear her staunch passion for practicing hospitality. You may respond with, “No, stop, that is a different book.” But it isn’t to her. And if you think about her journey in Christ, what she had in her LGBT community and what made the gospel plausible to her, a call to the practice of hospitality is not unrelated at all.

So let us thank God for giving us this courageous and generous activist among us, and welcome the authenticity of her spirit. She is as effulgent as her name. As my wife says about it: Roses and Champagne in a Field of Butter all together. What more could you want?