I was never ungrateful for where I lived. I knew how blessed I was. I never took for granted that I resided in the historic city. It was my delight to be one of those proud residents of greatness, the place of spiritual wonder. I anticipated raising my children in this holy ground of the world. When I had my first, I rejoiced that she had full citizenship. She, and then her brother, would be those privileged few. A home in the best city in the world.

There were some things that bothered me about my city, but not much. Those awful these scenes of execution came up. But they were the fault of the 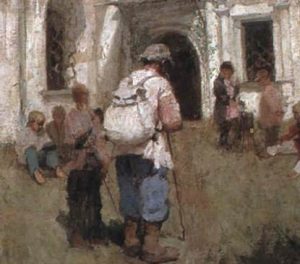 ruling administration. And they didn’t interrupt life too much. Even with the government’s harsh and unfair rulings, the city still shone. Until that day.

I wouldn’t have listened to him. He was in no place to instruct me. But I couldn’t not listen. Because I knew something about this one. The time I had seen him before, he was weeping over my city. At the time, I thought that it was jealousy, another visitor angry that he didn’t get to live here.

Today I listened, I had to listen, because of what I was witnessing. I regularly participated in these “protests.” They weren’t actual protests, of course. Those would not be tolerated. But, as a woman, I was allowed a public place to express my grief for the criminals brutally sentenced. I was there again today to express support for my people, my city, for my children. But this was the worst I had ever seen. This one was scourged to within an inch of his life and sent to die. What human heart would not sympathize and call out in grief. So I joined the parade again to at least give the poor soul some sadness to walk with. 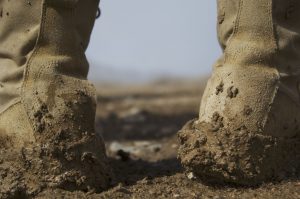 But I watched him as I followed along behind. I never saw a man shoulder such pain and look outward. It was that grace that riveted my gaze. Criminal he may be, but he was expressing concern for others even as he marched toward his death. What manliness is this? What true masculinity on display? I marveled. So when he looked at me, I didn’t turn away. I wasn’t repulsed but I was uncomfortable. Because there was more truth in that gaze than in all the lies I told myself. So I listened.

He spoke to me. It was really to all of us there wailing, but I felt like he was reaching into just my heart and delivering his awful blow, to me and my children. He, bloodied beyond recognition, looked right past my false judgment. In the moment He said it, I saw it. My city was not the beauty I had imagined. It was not the shining pearl, the model for the nations. It was not the glorious luster I had imagined, but a bygone community cowering in its shame. I knew in an instant that He was right. And I wondered who had the greater anguish, he or me. We were sealing our city’s fate in rejecting him. And my children would pay. His words delivered the sentence: 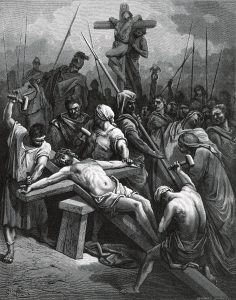 Jesus said, “Daughters of Jerusalem, do not weep for me, but weep for yourselves and for your children. For behold, the days are coming when they will say, ‘Blessed are the barren and the wombs that never bore and the breasts that never nursed!’