At a recent talk I gave, I was making my regular claim that the Bible never speaks in essentialist terms. That is, while God gives us bodies to identify our genders, His Scriptures never identify men or women by certain qualities. A smart pastor in the audience raised his hand and asked, what about 1Corinthians 16:13? The apostle Paul there commands to be strong, to stand firm in the faith and to be watchful. The English Standard Version (ESV) has him saying, “Act like a man!”

I had previously gone over the Greek verb underlying this command, but the question (and the translation) prompted me to take a closer look. The New Testament uses the word, 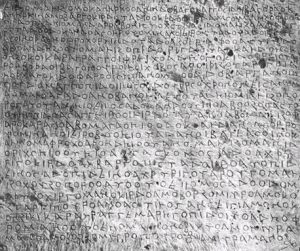 ἀνδρίζομαι (andrizomai),  only once. But it appears another 23 times in the Greek version of the Hebrew Scriptures, called the Septuagint (LXX), to which Paul is making reference in his exhortation. In a few of those OT uses, you can also find in some English translations, “play the man” (e.g., 2Sa 10:12, 1Ch 19:13, RSV). Even some Greek lexicons will use that English gloss. But other translations just have, “be courageous” or “strong” for these passages. That goes for  1Corinthians 16:13 also (NIV, NKJ). Why?

The Trail of Translation

The verb, ἀνδρίζομαι (andrizomai), means “be strong/courageous,” but it has the Greek word for “man,” ἀνήρ, ἀνδρὸς (andros) in it. So some translators feel it is warranted, since the Greeks in forming the word obviously associated manliness with courage and strength, to translate it that way. But is the Bible baptizing this Greek etymology? Are we to understand strength/courage to be a male distinctive? Are men uniquely made to be strong and courageous, as opposed to women?

As I said, all the Biblical uses of this Greek word, apart from 1Co 16:13, occur in the LXX Old Testament. The Scriptures almost always use it in conjunction with another word, translating the Hebrew stock phrase: “‎חִזְק֣וּ וְאִמְצ֔וּ”: “Be strong and courageous.” The two Hebrew terms overlap in meaning. “‎אַמֵּ֣ץ” (ametz) means (in the kal) to be strong or bold, with other uses being: stout, alert, solid, hard. “‎חזק”, (chazak) the other word in the pair, also has a range of meanings centered around to be/grow strong, or to have courage. So they both mean strength and courage. They are brought together to sum up both of those concepts. As time goes on, they even switch places in the expression.

But the Hebrew terms do not have any relation to the words for “man” in that language. This is why different Greek words are used to translate these Hebrew words when used individually. That is, the Hebrew words don’t make this same connection between manliness and courage/strength.

Yet we should still pay attention to the Greek Old Testament, the LXX, for the New Testament authors heavily rely on it. And Paul uses the Greek word, in its one occurrence in 1Co 16:13, again pairing it with “be strong,” just as in the Old Testament chorus. When we do pay close attention, we find out why the translation: “be manly” does not work.

The word, ἀνδρίζομαι (andrizomai) is used a cluster of times centered around the great commander Joshua, beginning with the aged Moses telling the

young general: “ἀνδρίζου καὶ ἴσχυε” (andrizou and ischue) (Deuteronomy 31:7), because you will take the land. The words here, as in most other places, are universally translated as “be strong and courageous.” Translators know that they cannot say, “Be a man,” because in Deuteronomy 31:6, the verse right before, Moses says the same thing to “all Israel” (Deuteronomy 31:1), about encountering the nations: “ἀνδρίζου καὶ ἴσχυε μὴ φοβοῦ (andrizou kai ischue, mae fobou).” Were all of the Israelites to be men?

How do you think the women Israelites were to hear this from Moses? Well, there are a few different possibilities.

You could think that Moses was saying, “You Israelites who are women, act like men in displaying this characteristic at this time, for it is needed.”

Or maybe you could interpret it as, “Israelite women, do that which the hormone, androgen, does to you. It makes you strong.”

Maybe you could decide that andrizomai sometimes means “be a man,” and other times not (like here).

Or you could come to realize that the word just means “be strong and courageous,” and the Greek Bible is using a word for courage without affirming its etymology from secular usage, that is, without affirming that courage is a manly distinctive. 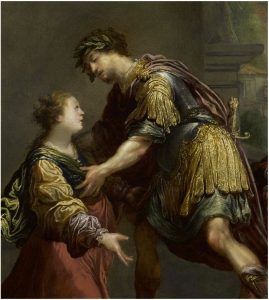 The last choice is the right one. Some other OT ἀνδρίζομαι (andrizomai) uses, based on who they are applied to, could mean either “be a man” or “be courageous/strong.” But some definitely cannot. Micah 4:10, for example, compares God’s people in Jerusalem, the “daughter in Zion,” to a woman in labor. This is a place where the Greek LXX and Hebrew MT diverge somewhat in expression. “Like a woman in labor,” the Hebrew says, “Writhe and groan.” The LXX says, “Have birth pangs and ἀνδρίζου (andrizou).” So, if our word really means, be manly, or be a man, we arrive at the incomprehensible sentence:

“Have birth pangs as a woman, be a man!”

Even, worse, in Jeremiah 2:25, a woman is speaking, saying that she will strengthen herself (ἀνδρίζομαι, andrizomai) to go after lovers. If our word really signified masculinity, you would literally have a woman saying,:

Perhaps these are ancient prophetic endorsements of transgenderism. Or, more likely, ἀνδρίζομαι (andrizomai) doesn’t mean in the Bible, “to be a man.” And it is why the word is almost always, and certainly in these cases, translated “be courageous/strong.”

Think about it. We know plenty of examples of when a word’s meaning diverges from its etymology, sometimes so much so that the etymology actually misleads us about how the word is used. For example, what we mean by “wizard” is a far cry from its literal etymology, which is the Anglo-Saxon word for simply 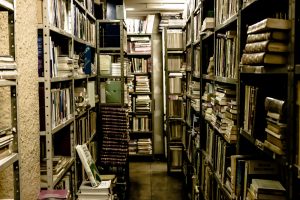 “one who is wise.” If someone is wise, do we call him a wizard? More on topic, the word, “virtue” literally means (from the Latin) “man.” But is that what we mean when we use the word? To my ear, it even sounds more feminine, that is, more likely to be applied to a woman, e.g., the proverbial “virtuous wife.” So sometimes etymology, as in the case of ἀνδρίζομαι (andrizomai), misleads us.

In point of fact, men and women both need to be strong and courageous, but in different ways, to love each other well. Certainly men usually sport superior upper body strength, and must have physical courage to fight off enemies to secure their women’s families. But women must go through childbirth, a physical feat of great strength. Women must have courage to trust God in the face of threats to love their families well. It takes great bravery at times to submit, as the Bible tells wives to, to a husband. That goes for any husband, no matter how great he is. So strength and courage are not solely manly traits. (Thus in a companion verse to the one cited above in the LXX book of Jeremiah, Jer 18:12, ἀνδρίζομαι (andrizomai) occurs again in the mouths of men saying the same thing the woman did: “We will strengthen ourselves to go after lovers.” Both women and men strengthen themselves, in this case to ill purpose).

Therefore, when we come to 1Corinthians 16:13, the one time ἀνδρίζομαι (andrizomai) is used in the New Testament, how should we translate it?

The letter is addressed to the whole church (1Co 1:2), and this final greetings section includes everybody, mentioning households and Priscilla, for example. The letter in general, and the passage in particular, is clearly not gender specific. 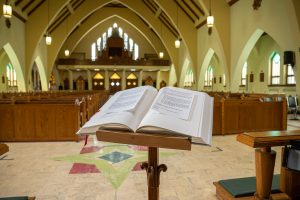 In the midst of the greetings, Paul says, Be watchful; stand firm in the faith; ἀνδρίζεσθε (andrizesthe) and be strong.  Again, a pairing, like OT stock phrase. He is not telling the women in his audience to be like men, but telling them both to be strong and courageous.

Thus we must conclude, sadly, that the ESV (and the old NIV, along with the NAS), however well-intentioned, err in the translation, “act like men.” And translations like NIV, RSV: “be courageous” and NKJ “be brave” get it right.

Let us both, men and women, be brave and strong in the masculine or feminine ways we need to be.