“When Phinehas the son of Eleazar, son of Aaron the priest, saw it, he rose and left the congregation and took a spear in his hand and went after the man of Israel into the chamber and pierced both of them, the man of Israel and the woman through her belly. Thus the plague on the people of Israel was stopped.”  –Numbers 25:7, 8 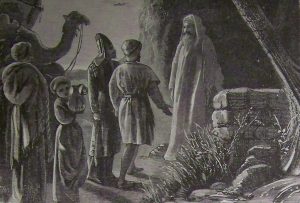 Why such a severe punishment for premarital sex with a pagan woman? The answer lies in the story of that pompous windbag, Balaam.  Balak, the king of Moab, offered Balaam fabulous wealth to curse the Children of Israel.  Now Balaam coveted that cash, but he had a problem:  he had a genuine knowledge of the LORD.  In Numbers 24:3-4, Balaam describes himself as “the man whose eye is opened,….. who hears the words of God, and knows the knowledge of the Most High, who sees the vision of the Almighty, falling down with his eyes uncovered…”

As is often noted, half of Balaam’s prophecy describes his own far-seeing greatness.   Actually, he does have a supernatural awareness. He goes off to curse Israel fully knowing that he is opposing God’s plan.  (The demons also believe and tremble).  Balaam is so determined that even a talking donkey cannot dissuade him.   “You have made a fool of me!”(Numbers 22:29) he yells at the humble beast.  Why doesn’t he say, “You are talking!  It’s a miracle!”?  Because Balaam has no trouble believing in the supernatural world.   In fact, he is bent on manipulating it. 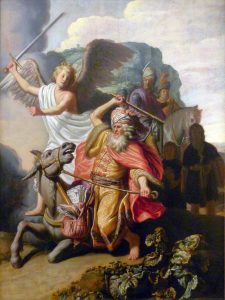 Balaam tries to curry favor with Israel’s God and Israel’s enemies.  He realizes that he will not be able to curse, but only bless Israel, and even prophesies the coming Messiah.  However, he also offers counsel to the Canaanites: a sure- fire way to destroy Israel. “Behold, these caused the children of Israel, through the counsel of Balaam, to commit trespass against the LORD in the matter of Peor” (Numbers 34:16).

How? The only way to oppose Israel was to destroy her relationship with God.  Therefore, Balaam suggested a substitute love offensive.  Send the Canaanite women out to seduce the Israelite men and draw them into nasty idol worship. “Hey baby, there is a big party at the temple of Molech tonight.  Great beer and infant sacrifice!”  Balaam knew such blatant rebellion among the newly chosen people, tearing down a purpose of gender for building commitment, would bring down the retribution of God.

And he was right. It did, until the plague was halted by Eliezer’s spear. 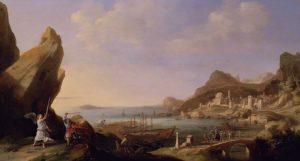 It is great news that in the New Covenant, bloody sacrifices and bloody punishments for sexual sins have been replaced by the once for all sacrifice of Christ. Otherwise, many of us would be getting a spear in the gut.

But the same ancient counsel is being used to destroy the people of God. Pornography is the new love offensive of Balaam sneaking into our homes and hijacking our limbic systems.  This addiction prevents folks from feeling worthy to go to church or to fully enter in once they are there.  And it erodes commitment to a spouse. But it doesn’t have to be that way.  Some excellent practical advice may be found here. 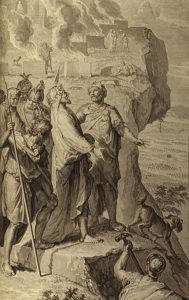 Rahab, loose woman of Canaan, is enfolded into the beloved community because of her faith in Israel’s God.  Formerly demon-possessed Mary Magdalen saw Jesus Christ take the spear in his side for all her secret shames.  Like her, let us repent and find help, so that the love of Christ might remake our mangled addict brains and re-purpose our mistreated bodies for a wholesome and holy new life.