Last time I introduced Ryan Haines, who shared with us about his unusual friendship with Seraphim, who was born a man and, to deal with gender dysphoria, has chosen to live as a woman. We heard some about their mutual respect and care. I’ve invited Ryan to talk about the time when their friendship was severely tested, as Seraphim determined to get surgical changes to reinforce the choice to live as a woman… 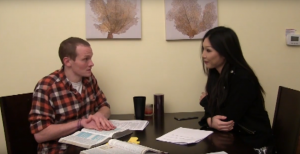 Yes, Seraphim is one of my dearest friends, but our friendship was tested a few times leading up to his transitional surgeries. He asked me to pray that God would help him get these procedures, and I had to explain that I could not pray this for him because I did not believe that it was God’s will. This led us into some tense conversations about his transition. I pleaded with him not to go through with it. I urged him to turn to Christ, but it didn’t change his mind. He and I had talked about everything together, and now it was just days before the surgery. What was I to do? Do I keep pressing the issue and risk pushing him away?

Being a friend to Seraphim would mean loving him and being by his side throughout this entire transition. He was about to face a long and difficult road of painful recovery, and I needed to be there for him, because, as it says in Proverbs 17:17, “A friend loves at all times, and a brother is born for a time of adversity.”

He went through with his bottom surgery in April, and I was there by his bedside in the hospital. Once he was released to go home, I continued to visit him regularly while he was bedridden in pain. He and I have maintained honest dialogue through this entire process. He knows that I don’t agree with the choices he’s making, but he also knows that I will always be his friend and that I will always be by his side.

This friendship has granted me numerous opportunities to share the good news of Jesus with Seraphim. I’ve even called him to repentance and I’ve urged him to find his joy in Christ, but overall, I simply walk with him as a friend. I expect that the idols in his life will eventually let him down.  On that day, when he comes to the end of himself, I will be a friend for him to turn to, not to point fingers or say, “I told you so!” but to gently help him pick up the pieces and rebuild his life upon the rock, which is the truth of God’s word and the never-failing, ever-enduring love of God found in the gospel of Jesus Christ.

Thanks so much, Ryan! If you’d like to hear more of Seraphim and Ryan’s hard-hitting conversation, here is a second  YouTube video (Part II of last week’s) that they kindly made together. Bear in mind that they made this video before the surgery described above.  It lets us in on their extraordinary friendship.

Does it give you hope for how things could be?