I knew that something had gone down. He came back with that look, that faraway look, like he belonged to another country. I had seen that look before, and those times it meant something crazy was coming. It meant that God had had some dealing with him or he was going to make some kind of rash move. Those looks scared me, but I loved them, and I loved him for them. Those looks were when I could think the best about him. Sometimes he had such faith in His God that his feet didn’t seem to touch the ground. But then there were the other times…

Those other times were what had led us to this point. That look in his eye made me realize how far apart we had grown. But he wouldn’t talk to me about what he had experienced. I knew he wouldn’t. We have politely slipped into the arrangement of sleeping apart. We used to hope that something good would come from our love, but that was a long time ago. I don’t know if I could forgive him for some of the things he has done. I don’t know if he can look at me like he used to, like someone who is on this journey with him, like a co-heir, rather than like part of the caravan that needs to be packed up and carried around after him. Let’s face it, our relationship needs a miracle.

I knew something was going on between YHWH and him when he instituted a new ritual for all our men. I knew it as a rite of passage that some peoples in other places do. But it was something different for him. It was for the covenant, he said. It is a bloody thing, but every male in our camp had to submit to it, even the young boys. So the rite doesn’t seem to be marking something they have done. But that is just like him, adopting some cultural practice to some unique end.  I abided by it. He is my husband after all, my lord, even if he is not being the man I think that he should be. I can do that because, if there is one thing I have learned, YHWH, my Lord also, my greater Lord, takes care of me even so.

Today he startled me by rushing into the tent and calling me. I had not seen him move so fast in thirty years. “Quick!” he beckoned, 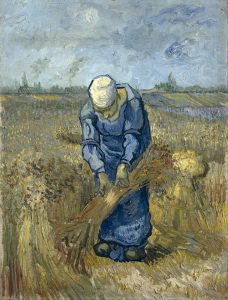 “Three seahs of flour for cakes!” Three seahs!? That meant that I would be kneading all afternoon. I looked past his shoulder though he was blocking my sight.  Then I saw why he was frantic. It was a guest…well, they were…it was hard to tell. There were three men, yes, but it was as if they were one. I realize that that sounds ridiculous, but the two of them moved as if in a special bond and the third was coming out of that. Whatever they were, these were no ordinary guests.

I started the kneading, but honestly, this was going to take forever. His guests had almost finished eating when I started to wonder if he was going to offer them this bread at all. Why is he trying to keep me out of things?

I had to see this guest company up close—Could this be…? I crept to the tent door. I could just overhear Them. Wait! They were talking about me! At least I think it was me, but They used a strange name. Did They just call me a princess? “…just twelve months and your wife will bear a son.” What!?

It all just struck me then, what he wasn’t sharing with me. An unbelievable promise. It couldn’t be. We were beyond the point of being together in so many ways. The very thought of it bubbled up into private laughter. It wasn’t an audible laugh. Certainly not anything that would give me away behind the flap.

The next thing I knew, though, He was asking an account of my husband about me laughing. Of course, the answer was that anyone who heard this for the first time would laugh. I know my husband would. But these outrageous words were still the words of….I couldn’t, I shouldn’t…how could I be laughing at His words? How did He know?

There was nothing to do but to come to my lord’s rescue. I stepped out into the daylight. Standing fully before Them, I said “I didn’t laugh.” This statement was technically true, since it really wasn’t out loud and I don’t know how He knew, unless…Then, at the last, He looked directly at me.

His words penetrated my soul. They shot through me and broke me and, at the same time, made all things possible. They trumpeted how there remained not one fiber of me that He didn’t know, from the flour stuck to my knuckles to the aching of my heart for my husband. They promised pain and joy. They filled up the air around the camp yet were as quiet as a barely perceptible breeze.