The break-up of the Beatles broke the heart of a generation. Young people of 1970 could hardly believe it. The fact that John came on the radio and said “It’s just a rock band!” didn’t help. 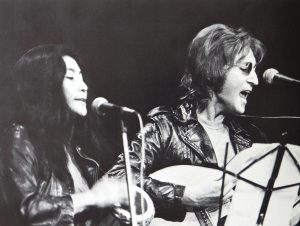 A lot of the blame at the time fell upon Yoko Ono. It was thought that she slithered in and inserted herself between John and Paul. It was clear that Yoko had had a profound effect on John. They became inseparable. John, the musical artist, described Yoko, the visual artist, as “Me in Drag.” There was something to that. Leaving aside John’s divorce of his first wife, Cynthia, a sad matter which cannot be condoned, there was something to the way that John’s intense relationship with Yoko changed the dynamics of the Fabulous Four.

This idea of a girl coming in and disturbing the male company has powerful resonance with us. It was perfectly parodied in the movie, Spinal Tap, as the typical fate of all serious rock bands. Why is it so recognizable? Because it so often happens that way.

And you know what? It’s a good thing.

Yes, a woman needs to come in and break up the band, so that the men involved grow in important ways. Male bonding is important for us. It plays a fortifying role in a man’s life. But it isn’t the end-game. Intergendered relationships are God’s way of further bringing a man to intimacy and fruitfulness.

“Still, why can’t the band continue as well?” you ask. “After all it was so good!” Yes, it was good. And maybe collaboration can continue in some way, but it can never be the same. Because the man has grown through the woman, as it needs to be. 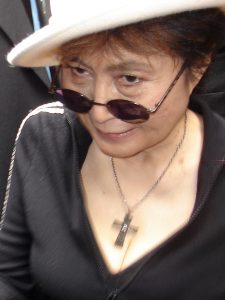 But remember that some of the Beatles’ most powerful work was not in their collaboration but emerged on top of it. Yesterday was all Paul, not a collaboration. And Imagine was not even a Beatles’ song. (By the way, if you want a humorous takedown of Imagine, the music video is readily available on the Village Church Memorial Website Slices Page –third slice).

Let Yoko break up the band. Isn’t it what the woman needs to do?