Her name was Linda Hubka. We were in 8th grade, or was it 7th? I had decided that she was the one, and I made up my mind to ask her out. I took a deep breath and let her know that I liked her. But Linda Hubka was a discerning girl, especially for that age, and was reluctant. She thought about it and then made it clear: she would not go out with me. Surprising even myself, I persisted. I insinuated. I hung around. All to no avail. Eventually I got the message. But I couldn’t unlatch my heart.

I continued to pursue. Linda Hubka continued to spurn. At last, I decided that I couldn’t let the whole affair end without showing her what she meant to me. What 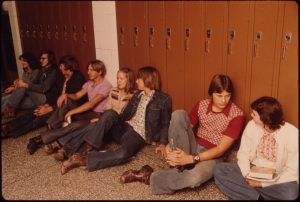 affair, you ask? You never even went out on a single date. Well, it was a big relationship in my head, I guess. So I determined a plan to end it with a splash…literally.

I walked up to Linda Hubka between 6th and 7th period, and told her that I know that I had been an annoyance, and that if she really wanted to be rid of me, she should come right out and tell me to go jump in a lake. Maybe that would sink in.

Now Linda Hubka was a kind-hearted soul—which was one of the reasons I was hung up on her. She paused, “If I say that to you, you might actually do it.” I waited persistently. She yielded. “Go jump in a lake,” she said.

So I did. As I said, it was between 6th and 7th period, but there was a middle-sized pond on the opposite corner from our Middletown NJ middle school. So I went across the street and jumped in the lake. I didn’t wade in serenely or do it half way. I really jumped and went under the muddy water. Then I climbed out. It was pretty cold. I think it was February or something. 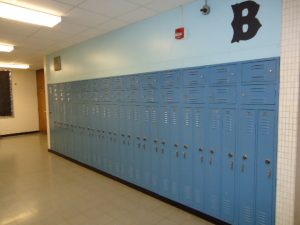 When I showed up for French class, drenched and muddy, the teacher was pretty sure that I was drunk, and sent me right back out and down to the principal’s office. Before I entered the office, I turned around and saw the long trail of wet footsteps down the hallway.  I never forgot that memory. I had left my mark.

It was a mercy to Linda Hubka that things never worked out with us. I was not at all ready to conduct a relationship. I could not, in any way, closely engage with another person without causing great hurt, as subsequent relationships clearly showed. I didn’t have the equipment.

But Linda Hubka gave me a great gift. There was something important happening in that jump in the lake. It was the first leap forward for me into what it was to be a man. The impulse to give all for a woman, body and soul. To surrender one’s schedule, one’s reputation—as I did in the principal’s office, even one’s reputation for her. To lay down one’s life. It was the beginning of my masculinity.

This impulse is there in a boy, before it is pummeled by rejection, twisted by scorn, drained by cynicism and torn out by hurt; before it is gutted by his own idolatry and whittled by his ambition; and he gives up and settles for lust.

Can we instead cultivate that leap in the lake in them, that seed of manhood?