A Lover or A Mother or What?

Especially for a woman, what she does, and so who she is, can change radically from one phase of life to the next. A woman in different phases of life has different needs. Proverbs 31, the Old Testament chapter, describes the “virtuous wife” as a super-woman who seems to do so many different things. Professor Tasha Chapman, of Covenant Seminary, once suggested to me that the passage may describe different phases of a woman’s life. Or, as another woman put it: “I don’t live a balanced life, I live a balanced lifetime.”

Jesus shows special sensitivity to women’s concerns at every stage. Whether envisioning the difficulty of future events for pregnant & nursing mothers (Matthew 24:19), or comforting wailing women while bearing His own cross (Luke 23:27-31), or returning a lost son to his mother (Luke 7:11-15), Jesus’ concern, and His atonement, is manifest for all feminine situations.

A woman with an incurable flow of blood. A girl who dies from an unstoppable ailment. All three synoptic authors tell the story of how these two healings happened together (Mark 5:21-43, Luke 8:41-56, Matthew 9:18-26). In so doing they make the stories a highlight of women’s physical issues. The healing of a woman interrupts the journey to a girl.

The first woman has an incurable illness in her body. She had been subject to the bizarre first century treatments for a Zabah, the term for a woman with an

unstoppable flow of blood. She had probably been given wine mixed with powder made from rubber and garden crocuses. She could have been treated with sudden shock, and made to carry around, against her body, the ash of an ostrich’s egg. All to no avail. The account shows us the difficulty in addressing the needs of this woman’s body. Then Jesus arrives at the house of a dead girl, making the momentous utterance, “she is not dead but asleep.” We hear that this is even more than a resuscitating. She needs to be awakened. A healing of the incurable. A miracle of calling forth from death. Providence brought them together. Amazing miracles for these women but something even more.

The two details invite comparison between these two women. In fact, Luke puts these two mentions of twelve years one right after other, in consecutive verses, inviting connection even more strongly (Luke 8:42, 43).

Why specifically mention that the girl was twelve years old? To show she could walk when Jesus tells her to? Perhaps. But why specifically give the age, twelve? Age twelve was very important to how first century Jews categorized women (as discussed in the Mishnah). The distinctions they created had a lot to do with when a girl was marriageable and able to move toward child-bearing. A girl aged 1-10 was called “child.” At age 11, she was referred to as “under-age.” Then, from 12 to 12½, she became a “young daughter.” Over 12½, she was known as an “adult.” 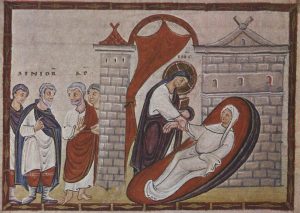 We should also note, to further step into the account, that the biblical worldview exalts child-bearing. Today we may miss the import. In its quest for women’s equality, our society now downplays the woman’s unique gift in bearing children. But in the Bible, it is a glorious privilege of giving life. The girl’s illness would have cut her off, not only from life, but from giving life. Cut off, before she could menstruate. Like Jephthah’s daughter in the Old Testament (Judges 11:28-40), she would be cut off from child-bearing to die as a virgin, a thing of great mourning. That is, until Jesus Christ shows up. Then this daughter is called to rise to womanhood: Talitha koumi!

Every Phase of a Woman’s Multiplied Pain

On this Mother’s Day, know that Jesus Christ meets the needs of a woman’s body, both early in life and later in life.

A woman’s body is beautifully complex in order to be a giver of life. But that complexity means that a lot has to go right. A lot can go wrong. And in the world in which we now live, the pain of a woman’s body in its life-giving is greatly multiplied.

I used to work at NYU Medical Center, in the Department of Epidemiology and Biostatistics, helping researchers study women’s health issues through large scale data sets. I used to go to department meetings and watch these scientists being constantly mystified about the processes going on in a woman’s body. They were often baffled at the complexity.

What needs do you face as woman? Jesus will meet you in every phase of life. He cares about even your body’s needs.

Young women who are coming of age go through some large changes in a very short time. One day, they wake up to a world that is suddenly no longer about drawing 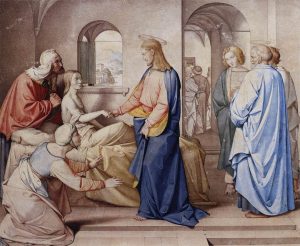 unicorns and solving math problems and acquiring cute accessories. Their world rapidly becomes about more serious issues: issues of relationships and issues of responsibility and issues of blood. If that is you, you may have things happening in your body you do not like or do not understand, emotions that take you on a roller coaster. Jesus understands. He will sit in the same car with you on that roller coaster, as He prepares you to be a giver of life. Even after He heals the young girl, He is still looking after her needs (Mark 5:43).

For women seeking the Lord to have children: He understands. He gives different answers to that cry of the heart, so seek to touch Him, just the hem of His garment. As Jesus enables the woman he heals to “Go in peace” (Mark 5:34), He will bring peace to you as well.

If you are in a stage of life where you are losing your children, like the widow of Nain, Jesus Christ can interrupt the funeral (Luke 7:11-15).  Maybe your body is aging and you look at it with despairing eyes, thinking how it is not useful for anything anymore. Instead, look at how Jesus looks at this older woman and lovingly calls her “daughter” (Mark 5:34). Though probably older than Him, she is young to Him. However aging your body, You are young to Him too.

Reach out to touch the hem of His garment, woman. Hear Jesus say to you: Talitha Koumi!