You might expect that the funny Greek word that means meekness, πραῢς, (pronounced something like pra-oose’), would appear a lot in the New Testament, since it sounds like such a Christian virtue. Not so. The word only appears four times in the New Testament, three of those times in the gospel of Matthew. (There is a related word, but that is more like ‘gentleness’ and usually translated that way.) The first occurrence of pra-oose is in the famous beatitude, “Blessed are the meek, for they shall inherit the earth,” the other two times to describe Jesus Christ (Matthew 5:5, 11:29, 21:5). The only other time this word materializes is in the first letter of Peter, when he is talking about women.

Why is this word just used to describe the acts of Jesus and women? Well, it has to with the meaning of meekness. It is a great Christian virtue, but it is also an important tool of femininity. Not in the twisted way it comes across in The Handmaid’s Tale. Meekness is not being silent while you are being abused.

You will often hear preachers, who are preaching a sermon on meekness, proclaim, “Meekness is not weakness…even though the words sound similar!” This is so. Meekness is the fantastic ability to not do something you could do. Not from natural reticence, from being oppressed or from feelings of inferiority. It is simply a choice to not do for God’s purposes. And this takes great strength.

This is why real meekness is a marker of greatness, one of most advanced of Christian virtues. It is very precious in God’s sight. 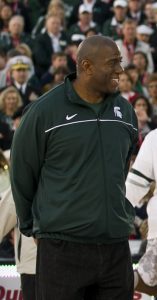 What is the mark of a great basketball player? Not only being able to shoot, but knowing when not to take the shot. Look at the choices of Magic Johnson or Steph Curry. Unbelievable shooters, yet they know when it is the moment to pass to another team-member. Maybe they could make the basket, but they choose not to.

So how does Peter actually say it about women?

3 Do not let your adorning be external– the braiding of hair and the putting on of gold jewelry, or the clothing you wear– 4 but let your adorning be the hidden person of the heart with the imperishable beauty of a meek and quiet spirit, which in God’s sight is very precious. 5 For this is how the holy women who hoped in God used to adorn themselves, by submitting to their own husbands,… (1Peter 3:3-5)

Why does Peter tell women to be quiet? Is it because women are not as good at speaking? Or is there something about men in general that they should talk and women should not? Or are women not as able to discern good doctrine? No and No and No. Statistically, women speak more words during the day than men. So, generally, they are pretty good with words.

No, it is rather because in some relationship contexts, God asks women to refrain, in order to promote their brothers or their husbands. Here God asks a wife to leave space for her husband to fill. And in the filling something important happens in the husband. Something even more important happens between the two of them. Womanliness, like manliness, is about relationship.

Do you think of meekness as a good thing?