You may feel confused or like you cannot keep up. There is a reason for that. In the last post, I started to explain the letters in the inevitable proliferation of categories when God’s image categories of man and woman in relationship are rejected. We got through C. Let’s start out easy with perhaps the clearest term of all:

I: Intersexed = hermaphrodite. This is a medically objective description of the mercifully rare birth defect of ambiguous body sex, where one’s genitals do not match one’s chromosomes or one’s chromosomes have gone wrong. Although the effects run along a spectrum, this can be a chromosomal, gonadal or genital abnormality. You can read more about it here. T (transgender) hungers to gobble up other letters to appear more massive, and I is its next prey. Never mind how I feels about it.

A: Asexual. Someone who is just not interested. Usually caused by hormone deficiency or psychological trauma, someone who simply does not want to have sex.

A: Ally. Someone who enjoys walking in parades and often has the added motivation of a friend who identifies with one of the other letters.

Whoo! There you have the usual list, for the time being. I am leaving out pansexual, agender and some others, because I am getting tired and, after a while, it is just more of the same.

An important point to note about this coalition: They don’t all get along. As Glenn Stanton points out in his excellent book, Loving My (LGBT) Neighbor, a minority described by the letters would advocate for rights of all those letters. And, when you get right down to it, even the first two letters (Lesbian and Gay) have had a rather stormy history. It’s not like they hang out together. Guess why?

But nonetheless there is a coalition. There is one thing that unites them all (except for most of I): the removal of gender binary in relationship. When you do that, complexity must follow. In my view, as this removal is a rejection of God’s gift, it is a harmful complexity. It robs relationships of intimacy and fruitfulness that is their intent. But that may be the point–the more letters, the more people can be made to feel like there should not really be any categories, including male and female.

Now let’s go further in the letters to come. We’re going to do like that Dr. Seuss book, On Beyond Zebra, which went beyond the current alphabet to the mysterious places beyond Z. This book was troubling to me as a child, and I never figured out what was going on with it. Why my mother had it around, when it was hard enough just learning the alphabet, I never understood. But dare with me…

P: Polygamy. In spite of lobbyists’ loud protests, this is certainly a big float coming down the avenue in the Queer parade. It means men affirming the privilege of having multiple wives at the same time. Polygamy is already advocated in different places of our society. It is just waiting in the wings for its big moment.

P: Polyandry. What’s good for the goose… A woman, no doubt with money, who will arrange to have multiple husbands. As with all of the letters above, there are fewer cases of women than men, usually a lot fewer. You can expect the same here.

P: Polyamory. Why bother with the mess of marriage?  This term means preferring many lovers at once.

I hope that this helps you, dear reader, in navigating the current cultural scene and even to look ahead. Yet there is one more letter I must mention. This is just as inevitable as the others. You can expect it as sure as yellow jackets around a lemonade stand in August: 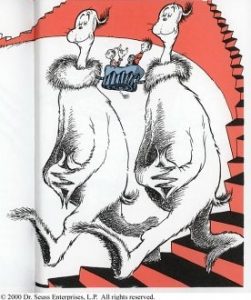 A: Animalism.  Though currently just a philosophical term, I am using this word to describe the modification of the body to look like an animal. Why does body-animal modification follow? Because gender is a gift of being made in the image of God. As the alphabet list shows, when you lose gender in relationship, you lose gender. And when you lose gender, you lose a big part of what it means to be made in God’s image, that is, to be human. Combine this loss of understanding with growing technology, and you will see many people changing their appearance to recall the animal they identify with.

I know it sounds crazy right now, but wait and see. We are in the realm of Romans 1.