Another Scenic Overlook from enGendered, from a story given to help us feel the asymmetry of origin. Can you Bible readers guess who they are before the end?

She was from the high country and she was a prize. Many had secretly desired her, but didn’t dare go beyond that. They would need to go through her formidable father, the laconic and battle-hardened general, and who would venture that?

As she sat astride her donkey now, on her way to see the great man himself, she wondered at her dramatic 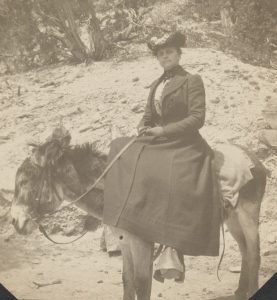 betrothal and recent wedding. Her father had always sought out the best for her— the best sandals, the best training, even fussing over the best donkey . . . so why not the best husband, she laughed to herself. For that is just what her father had done.

She remembered back to that extraordinary day. The tribe of Judah had been scoring amazing victories against the dreaded Canaanites, defeating Sheshai and Ahiman. Even Talmai fell to them. The Israelites could hardly believe it. Would the land, so long polluted by human sacrifice and the sacred prostitution of Baal, finally be theirs to start the world’s new redemption? Had God’s word been true all along? But there remained Kiriathsepher, the unconquerable town, with its towering walls and a skilled army to match. Even atop all their heady victories, the Judahites quavered before it. Not really possible, they reasoned.

That is when her father had done it. He called an assembly and stood up there on that makeshift platform. He had told her what he planned to do, but she was still shocked when she heard it uttered. She wasn’t sure anyone else could have pulled this off. But this was the great general. Revered. Wise. People always moved aside when he walked by. And when he spoke, the rest of the army always grew silent to listen, even Joshua.

They sure listened now. His old face, lined with untold experiences, commanded their attention. His old voice, full of a lifetime of joys and sorrows, hung in the air. He shouted the offer: “To the man who attacks Kiriathsepher and takes it, my daughter shall be his!” That had done it, all right. Changed the tide of morale. That night, several different men had begun to strategize and plan an attack.

She could hardly believe it—she, little Achsah, mere Achsah, the motivation for the Lord’s mission! She was just a girl. She hardly slept because every time she thought of it, her heart beat too fast so she couldn’t stay lying down. Would they do it? And who would be the first? Yes, who would it be?

Three days later, when it turned out to be Othniel, the son of Kenaz, she had smiled. She knew that some people did not hold him of much account, but she knew better. Her father had done it. Once again, he had gotten her the best.

The donkey had stopped. Achsah was roused from her thoughts. There was her father, Caleb, right there before her. The moment had come. She alighted from the donkey he had given her so long ago to make her request.

In this imagining from Judges 1:9-15, what do you think Achsah was trying to do?