Another Biblical Scenic Overlook from enGendered. Can you guess who they are before the end?

They were angry. These sisters were women with a mission, and no one—certainly no man, they were part of the problem—was going to stop them. When they reached the guards, men whose job it was to kill on sight anyone who approached improperly, a charge they took very, very seriously, the tension in the air was electric.

The five young women slowed down a little, as caution cried out in their minds. The youngest glanced at her third older sister, who was not stopping, which gave her courage. No! They would keep going. For their cause was righteous, was it not? 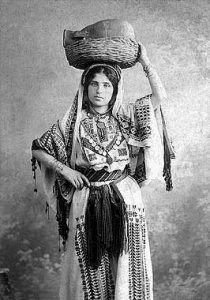 The women’s march took the guards by surprise. After an initial hesitant tussle, the Levites let the women pass without bloodshed.

So approached the five sisters to the revered seat. The hoary head lifted, and one eyebrow of the sharpest eyes you might ever see rose in slight surprise. He knew Mahlah, and a glance at the others told him who they were. In fact, he made a good guess at why they were here. And he honestly didn’t know what he was going to do about it.

But now the women froze before him, as if they had forgotten why they were angry. He motioned them forward. Eleazar came and stood behind him in attendance. The sisters shuffled into the great presence.

When no one said anything for what seemed like a long time, he spoke to reassure them, “The daughters of Zelophehad are welcome. What is your case?”

Mahlah, who had been so brave up to this point, seemed to have lost her nerve. So Hoglah stepped forward. She tried not to look at him, but then his words reminded her of why they were here: Yes! Her father’s name!

She raised her face and, now in confidence, her voice rang out. Hoglah began, “Our father died in the wilderness . . .”

The story is from Numbers 27:1-11, an old text about an incident occurring during the Israelite’s forty years wandering in wilderness. Almost, incidentally, the text shows the respectful treatment of women in the ancient covenant community. Especially compared with Numbers 36:1-12, describing an identical approach by a group of men, the passage displays women’s equality as God’s image-bearers. They had a voice, one that in this case precipitated nationwide legislation.

Does this test your view of women’s treatment in the Old Testament?