(Another Scenic Overlook from enGendered, showing the power of womanliness…)

It had been a long time. A long time of dusty desert trails and fearful sprints from danger. He was tired. Tired of running. Tired of not having a home. Most of all, he was tired of maintaining a vision for something that had about as much substance as morning fog.

Sometimes, it really seemed possible that he would become king, just as the prophet promised. But then again, there were lots of times, this being one of them, when it just seemed ridiculous. No support base. No political pathway. And no end in sight to the murderous monarch to whom he had sworn his loyalty for life. There was just no way this could work out. 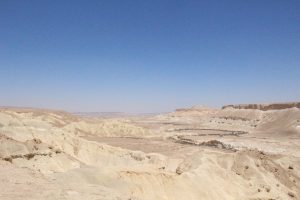 tatively. Yes, what was it? His men were hungry again. Paran was a waste. Why did he even come here? He wasn’t sure. He had had to get away and think. And pray. But Paran wasn’t such a great choice, he now thought. He knew the land. He had managed to get them to water. But they needed to eat too.

He allowed his mind to run over the inhabitants in the area. Would there be a friend for them here? There was Nabal, to the North, whose numerous sheep he had protected for many years. Nabal would be shearing his sheep in the hill country now. Still, Nabal was a little iffy. But what was to be done? They needed to eat. He ordered Abishai to send a delegate to Carmel and ask the rich man for assistance.

When the answer came back, a resounding “No,” David snapped. “Who is David? Who is the son of Jesse?” Nabal had replied. Who is David,
indeed. Well, maybe there were some things he couldn’t do—wouldn’t allow himself to do—but he could certainly teach this son of an ass who David was.

David ordered the entire company to arm. He told them they were going to fight. They were happy about that. Maybe he would never lift his hand against Saul, but by God this ungrateful worm would feel his wrath. Then he would know who David was. And others would too.

Four hundred mounted and rode toward Carmel behind him. David’s mind was hot. The tendrils of revenge, so long pruned, he now watered with his thoughts. Riding always gave time to think. And when he was riding to war, his thoughts always sped up. What he was thinking, honestly, was that this sparing of “God’s anointed” was getting old. There had been a hope because of Samuel. He was supposed to be a prophet, but David liked to think of him more as a friend. That guy had been so sure. So many times, when David was losing the vision, faltering in his resolve to stay in Israel, despairing sometimes even of life, Samuel was there, so confident in David’s coronation. The Lord’s plan, Samuel had called it. He had been so sure! But now he was dead. And maybe the vision of David’s rule should die with him. Who was David, anyway? Nothing. Nobody. And as such, why couldn’t he arrange his own relief?

His thoughts were abruptly interrupted by a small caravan that had blocked the path. His company pulled up short. Who could this be? And why were they in the way? David opened his mouth to order them aside but he never got it out. It was a woman in the lead! And she was not moving. What on earth . . . ?

“My Lord!” she cried, as she fell at his feet, her face to the ground, but he had seen her face. “Let the guilt fall entirely on me!” It stopped him in his tracks. He was listening then. And she began. And as she spoke and kept speaking, David’s grip loosened on his sword hilt. Then his hand dropped to his side. Then his head fell forward. And he remembered. He remembered Yahweh, hidden in his heart. She was speaking the vision. The picture of righteousness that Yahweh required, of forgiveness as he had been forgiven, of waiting for Yahweh’s deliverance instead of striving for it himself, of faith and love, of the sureness that Yahweh would fulfill His word to David.

David let his eyes glide over the long train of donkeys stretched out behind her, laden with food, and the sheep she was offering to be slaughtered instead of her husband’s men. Finally, David stepped forward and lifted her to her feet. He had almost thrown it away, the whole kingdom project. For Yahweh, he knew, wanted a king after His own heart and, in killing Nabal in revenge, David would no longer have been that. So much would have been lost, not just for him, but for the nation to be.

Now he remembered who David was. As he looked into her eyes, he could see that she understood this. That is why she had come. She had hurried to prevent his hands from being bloodied with guilt. She had come for God’s kingdom. How did she know all this? Who was this heavenly queen? “Abigail,” she said. And she asked him to remember her when God made him king. Remember her? How could he ever forget that face?