Nearly all Christians have a firm belief that humanity is made up of male and female, based on what they read in Genesis 1:27. “…male and female [God] created them.”  But what about the concept of gender? Here they are fuzzy. Masculinity and Femininity are hard to define, and passing through Western schools is liable to convince you that these terms of gender are a social construct. That is, it isn’t a

nything real or created b

y God. It is just a set of conventions to which a certain culture has conditioned people to conform. Pants or skirts. Nothing, really. So it is unimportant to being a man or a woman.

Several inquirers have asked me, why talk about gender when the Bible just talks about maleness-femaleness? One even expressed suspicion about my teaching in that I used the word, “gender.”

There are several problems going on here. The first is assuming that the “male and female” in Genesis 1:27 means what we usually mean by “male and female,” that is the biological differences in our bodies. But it is easy to see that this is not so, by reading what the WHOLE verse actually says:

So God created man in his own image,

in the image of God he created him;

male and female he created them.

The most important thing to get in reading this is that being made “male and female” comes from being made in the image of God. Maleness and Femaleness are not arbitrary or optional fixtures of our person, like indoor plumbing for a Jacuzzi, but they are part and parcel of bearing God’s image.

Okay? Now remember this. Apart and aside from the Incarnation of our Lord Jesus Christ, God does not have a physical body. So our female- and maleness, coming from God, must mean something more than our physical differences, nice as they are (and they really are nice). This is what the Apostle Paul is getting in saying that both man and woman are (literally) “out of” God (1Corinthians 11:12).

What more than our physical bodies is meant by the Bible’s maleness/femaleness? Well you might choose a different word to describe it, but I find gender to be a perfectly good one. Our masculinity and femininity, or our genders, reflect God’s internal Triune glory, and the relationships between the two show us the love in the very Trinity of the Most High. Our bodies express our gendered souls, and are the sign of them.

Now we must get to work as Christians defining femininity and masculinity differently than our culture does.  But this is not hard to do either, because the Bible tells us.

But to find out, you must first believe in gender as what it is, God’s gift to usher us into the love in Themself: A gift. An identity. A calling. Believe in it. 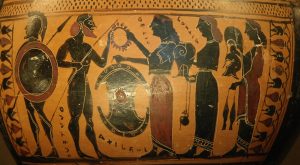 Do you have trouble with the word, “gender”?