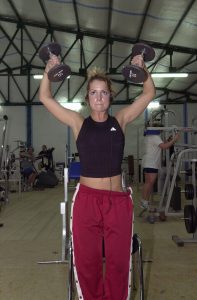 Today, another “Scenic Overlook.” Again, I am using historical and archeological study to try to imagine what a particular Bible story really might have been like. The game is to try and guess which Biblical character is being described before you get to the end and find out. Can you guess?

He was coming. She pushed down the stairs, through the bodies of men and women scrambling upwards. That was all she could think as she fought the crowd: He was coming. She could hear the zings and zips of bows and slings coming from the roof, where the men were emptying their supply of projectiles. She broke through and found herself on the storage level. He was coming. She looked up, alarmed at the sight. Lining the stairway and hanging off the ladders, people pressed tightly against one another, a mass of limbs. She looked down, to the levels below, even more bodies, with nowhere to go. There must be hundreds of people in here, she thought. Then she remembered the Tower of Shechem and shuddered. They had heard what happened there. The false safety. The barbarity. The screams.

He was coming. But she had reached the room she wanted. She knew this level like no man here, because of her “women’s work” she smirked to herself. It was the community mill storage, where spare stones and supplies were kept for all the townspeople to use. It was a great system, so long as someone minded the place. And, as the storage matron, she had been the one to do it. She fumbled for the foot-long key hanging from her sash and stuck it in, flinging open the closet and gliding swiftly to the item she wanted. This is our chance, she thought.

When she pushed to come out, she found a cluster of townspeople had surged to the door, looking for room to avoid the crush. “The stones!” she cried to them. She didn’t know if they paid any attention to her, but she was already back at the stairs, heaving forward with the “rider,” a rounded upper millstone balanced on her shoulder. Some of the men recognized what she was doing and began clearing the way of people before her. 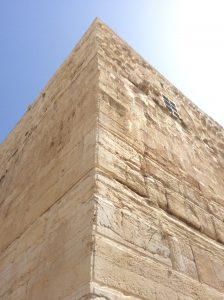 He was coming! As she climbed the stairs, the people inside the tower had fallen deathly silent. They were listening to a long speech he was shouting at them from outside, chastising them for their lack of support. With every stairstep she mounted, his voice seemed to grow more raspy and crazed. “Why do men always get so silent when you wish they’d say something,” she thought, “and always talk so much when you wish they’d shut up?” “Ah well,” she reasoned, “just keep talking till I get there.” The “there” was a lonely opening between the stones, an eye of a window in the tower wall, forty feet directly above the only door. This is where he’ll end up, she knew.

He was here. Then so was she. She could smell the smoke as she reached the window. There were precious few moments left. He had waited until the defenders on the roof had exhausted their supply of arrows and stones, and then had ordered his men forward. She peeked through the unobtrusive opening and saw the massive piles of wood surrounding the base of their soon- to-be funeral pyre. He had finished his speech, or more likely exhausted himself with it, and was sidling up to the tower door with torch in hand. For the fire would be started at the tower door to prevent any from escaping, she knew, and he would insist on lighting the fire himself. He would let none rob him of that grisly honor. As Abimelech reached the door, the woman of Thebez gave one last heave of her millstone through the crack. It tumbled out into space . . .

Did you Bible-readers guess it? This was an imagining of Judges 9, when the usurper, Abimelech, is out of control and no one can stop him. No one, that is, except the brave woman stuck in the tower of Thebez. Judges is a book a that deals a lot with gender. As usual in the book, where the men fail, the women shine. And this strong woman saves the day by “lifting weights,” that is, a heavy millstone, and heaving it out of the tower onto Abimilech’s head. He is killed. Her heroism sends everybody home.

What do you think? Does the Bible support gender stereotypes or defy them?