The Pactum of Persons

You need to know about the Pactum Salutis, Latin for the “Covenant of Redemption.” The term names the doctrine that for us sinners to be saved, the Persons of the Trinity entered into a pact with each Other, as divine Persons in eternity, about how They were going to do it. (For a few more words of explanation, Kevin DeYoung gives a good brief summary.) If you have never heard of it, it may appear an esoteric and unnecessary cloud. But if the Bible has something to say about the Trinitarian action in our redemption, trust me, it’s important.

How the Pactum was Recognized 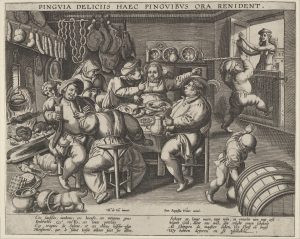 The Pactum has had its critics since the Reformers developed it in the early 16th century. Later people thought that it began mysteriously. They say it just appeared in a speech to the Church of Scotland General Assembly in 1638. The assembly accepted it without argument or exegesis. But, you know, those Scots never accepted anything without arguing about it. No one was arguing then because really, the covenantal character of God had already sprung from deep roots in the Reformation doctrines.  At that time, the Reformers were going back to the text of Scripture, learning about the counsel of God, the covenant of God, and, of course, the character of God, from which the understanding of a pactum salutis sprung.

tHE pACTUM PART OF THE cOUNSEL OF gOD

Knowing about the eternal counsel of God, things He has decided that never change, reassures us that our salvation is a done deal. Whatever He has said about that done deal, we need to know. To know that you were won apart from your own response underscores how your salvation doesn’t depend on you. If you are saved, it didn’t start with you and is not sustained by you. You are a clause in the loving agreement of the Father, Christ and the Spirit, before they made the mountains.

The revelation of this is like the first 2 chapters of Genesis revealing the creation of humanity. In Chapter 1, we learn that God did it (“God made 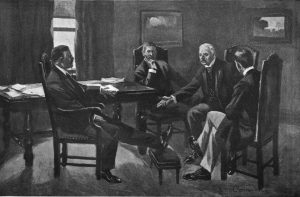 mankind in His own image.”). In Chapter 2, we learn how He did it (through the story of Adam and Eve). Similarly, some Scriptures speak of a set of redemptive vows before time. 2Timothy 1:9 speaks of the “grace Father gave to us in Christ before the ages began.” Ephesians 1:4 talks of how He chose some “in Him before the foundation of the world.”  God did it. But other Scriptures, like Psalm 2:7-9 and Psalm 110:1-7, tell us how. Read properly, as the New Testament authors do, as an inter-trinitarian conversation expressed in terms we can understand, these verses pull back the veil on how God gives us this predestinating grace. He does it by means of an agreement between the Promiser and the Beloved and the Witness to Their love. The Father promises to show up with the things needed to guide the mission. Christ avows to submit Himself to the incarnational role of mediator. The Spirit ratifies the commitments and testifies to Their union.

tHE pACTUM OF THE kITCHEN tABLE 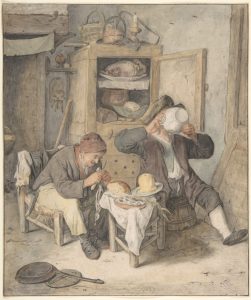 If the proponents of the Pactum had a fault, it would be visualizing these mutual commitments in the courtroom, or corporate headquarters. They analogize people in suits swearing to each other over a board room table. Rather, the pictures God gives us are closer to a covenant happening over the kitchen table, with the Persons looking into each Other’s eyes in love. Of course, how They actually are is beyond us, as They dwell in unapproachable light. So God helps us imagine by speaking of the One beckoning the Other to “sit here by me,” soliciting to “just ask me and I’ll give you the ends of the earth,” and determining to refresh by “drinking from the brook by the way.”

We need to appreciate the pactum because it tells us Who God is. God makes a covenant with the Mediator, the man Jesus Christ (Matthew 26:28), often called the Covenant of Grace. It has seven developments through Scripture, culminating in Christ.  But when God does something together economically, it always reveals an immanent truth about Themself. So, as the Bible lifts the curtain for us, we can see Who the Trinitarian God is. The life of the three Persons is a covenantal life.

We need the pactum salutis because the ad intra (inside of God) always grounds the ad extra (what God does publicly). We need it to know God.