1And a great sign appeared in heaven: a woman clothed with the sun, with the moon under her feet, and on her head a crown of twelve stars. 2 She was pregnant and was crying out in birth pains and the agony of giving birth. 3 And another sign appeared in heaven: behold, a great red dragon, with seven heads and ten horns, and on his heads seven diadems. 4 His tail swept down a third of the stars of heaven and cast them to the earth. And the dragon stood before the woman who was about to give birth, so that when she bore her child he might devour it. 5 She gave birth to a male child, one who is to rule all the nations with a rod of iron…

Who is the wonderful “woman clothed with the sun”? Because some of the chapter’s details about her and her offspring lend themselves better to individuals (Eve, Mary), and others to groups (Israel, the Church), scholars divide over who the woman represents. I would say that that very division is a clue to the meaning: The great woman is many things. In fact, this story is an archetype of how history goes. John’s visions always seem to take us down to the basics of life. And this vision teaches a message of gender distinction that is much needed today. 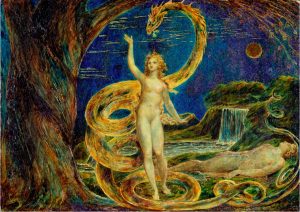 The vision certainly brings us back to the beginning. John identifies the dragon as “that old serpent who deceives the whole world” (v9). We meet that serpent, of course, deceiving the first woman in the Garden of Eden (Gen 3:1-6). When she bears the man-child in greatly multiplied pain (v2, Gen 3:16), The dragon-serpent is there and he “devours” her child Abel through Cain. But, as God promised (Gen 3:15), the dragon’s defeat comes through another man-child, Seth,  (Gen 4:25), who begins to rule by calling on the name of the Lord. The dragon is there again to devour the children of the great “woman,” Israel, quite literally when Pharoah has all of the male children of Israel thrown to the crocodiles in the Nile (Exo 1:22). Once again, the midwives rescue the child, Moses, to grasp the serpent’s tail and make it his ruling staff (v5, Exo 4:3-4). And, of course, the dragon is there again to devour Mary’s male-child, Jesus, by slaughtering every baby in Bethlehem through Herod (Mat 2:16). But God rescued Jesus to rule with a rod of iron, to bring the ultimate crushing of the dragon’s head.

From the beginning, the paradigm of history is the woman and the male child vs. the serpent. Which makes this passage about gender callings. Revelation takes us into meaning of history. John makes primordial reference into the foundations of life, and so, of gender. This explains why this story found expression in virtually every religion in ancient world, long before Revelation was written. Not because they are source material for Revelation, but because the archetype was source material for them. 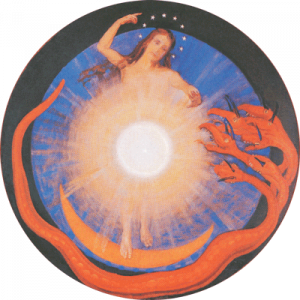 So what do these archetypes of creation, these paradigms of gender distinction teach? The queenly woman has the gift of giving birth (v2, v5). She bravely brings forth and makes a place for life. It is the distinction of woman, the privilege of woman, to bear the boy, create the home for the male-child. It is not the only thing she does. It is not all there is to a person who is a woman. But it is her distinction. It is archetype of womanliness to bring forth life, to make place for life. Even in the spite of tragedies of miscarriage or barrenness, God still has ways for woman to give life and make a place for it. The call to women is to refuse the way of thinking that says that men are called to important things, while what I do is just a side story. No, your’s is the story! Who is the main character of the archetype of Rev 12? Is it the woman or the man-child? Eve or Seth? It is hard to tell, because she seems to be the star—literally, clothed with the sun. You, child-bearer, are crowned with 12 stars (v1).

At the other end of the passage (v5), you have the boy that she bears, who rises to shepherd and rule. The grammar emphasizes the gender of this child: his maleness. Because the story gives the paradigm of the male: to rule wisely and well. That is, to take responsibility to vanquish evil for the woman. Because that is what ruling means: to take responsibility. You cannot have one without the other. And a man’s meaning is to assume the obligation to preserve woman, to vanquish evil for woman to flourish. A man becomes a man, not when he benches 225 pounds, but when he takes responsibility for others. You, young male-child, are made to crush the serpent’s head. Thus we have the New Testament commands of gender distinction. 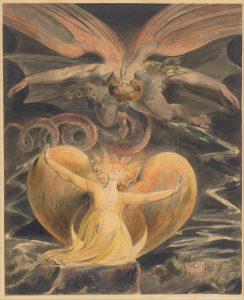 This is what I am thankful for this Christmas. Mary bravely gave birth in the midst of hostility, and made a place for the precious life. She didn’t have much for the man-child, but she made a place with what she had:  she wrapped Him up and laid Him in a manger (Luk 2:7). And then, through the responsibility-taking of Joseph (Mat 2:13), the family fled into the wilderness, as Rev 12 portrays (v6). And the One who came forth from her completed, in relation to us, the story of masculinity. He took authority over evil and finished it for us.

John’s vision of Christmas highlights our enduring calls of gender to one another.