In his lively retelling of the story of King Arthur’s Court, Idylls of the King, Alfred Lord Tennyson poeticizes various knights’ stories of valor and 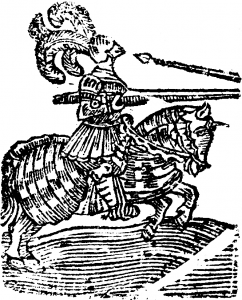 villainy. Tennyson is not always to be trusted in his characterization of gender. But one of the stories, of Geraint and Enid, brilliantly portrays how early marriages typically go, and how they can grow. It is perhaps not surprising that Tennyson gets this particular tale from the ancient mists. It is one of the oldest of the Arthurian legend:

Geraint falls so head over heels for his new wife, he starts to neglect his knightly calling. All he wants to do is dote on Enid all day long. She is grateful for his attentions and lavish gifts but worries that she is ruining his manliness. Gazing lovingly at him while he sleeps, and always physically close, she begins to cry over him, fretting that maybe she is not good for him, murmuring “I fear that I am no true wife.”

Her tears splashing on him awaken Geraint, who hears only the last line of her lament and worries that she has been unfaithful to him. He was already anxious about this since Enid worshipped Queen Guinevere, who had entered into an adulterous relationship with Lancelot. In fact, the young couple had quietly left the king’s court over the scandal. Now Geraint gets suspicious, but instead of talking to her about it, he withdraws into gruffness. He takes her out into the wilderness on a journey, treating her brusquely. She, puzzled, tries to respond in a wifely way, but it seems to just make him angrier.  He stews. Their physical distance grows. He won’t ride next to her, but he keeps her just in sight to protect her. He won’t let her talk to him, and she doesn’t seem to know how to find out what the trouble is, but instead just grows paler and paler. Even so, three times she manages to warn him of danger. Three 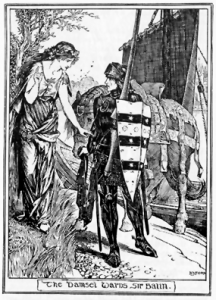 times he then overcomes threats against them, defeating evils in the woods, once more becoming the knight he had left off being. After fighting off numerous attackers, he finally swoons and is carried, presumed dead, into the hall of the great bandit, Earl Doorm. Geraint awakens again to his wife’s tears, this time to hear Enid rebuff the advances of the bandit. She is refusing to leave the side of her dying or dead husband. When the bandit slaps her, Geraint rises to cut off his head.  The knight then realizes how stupid he has been, repents of his treatment of her, and takes her upon his own horse to ride home body to body. They are even met by the great King Arthur, who blesses their communion. “Nor did Geraint doubt her more, but rested in her fealty.” From there, one expects their trust (and hopefully communication) to grow deep and sober.

This treatment of the patterns of a first year of marriage is without parallel in Arthurian romance, which usually concerns chivalric adventures and courtly sexual intrigue. While speaking within nineteenth century conventions, Tennyson’s vivid poetry captures the struggle of many early marriages of any age. Often insecurities in young hearts, compounded by a lack of communication, and even an inability to know how to communicate, amplifies fears leading to a breakdown in love. Guys often withdraw into gruff silence, even disallowing conversation about it. Wives don’t know how to overcome this, and withdraw into depression. But Tennyson’s exaggerated tale tells how genderly acting on both the partners’ parts can hold them together while God’s providence works to break the stalemate. A wife’s persistence in seeking a way to honor a pouting young husband while a husband continues to find a way to look out for his young wife helps him to come to repentance and deepen their marriage. Gender preserves them.

The beauty of the poetry drives the gender archetypal point home. As Enid affirms in the middle of their trial: 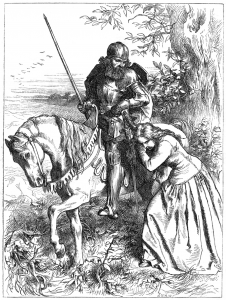 I hear the violent threats you do not hear,

I see the danger which you cannot see:

Then not to give you warning, that seems hard;

Almost beyond me: yet I would obey

This attitude, and Geraint’s commitment to her well-being, however imperfectly they are carrying it out, help Geraint to come to see how much he needs her.

Thank you, Tennyson, for holding up this mirror to our loves.