Read Ecclesiastes recently and was struck by the passage at the end of chapter 7. I usually am bothered by it, not so much because it seems negative against women but more so because, despite all of Solomon’s wisdom, it is sad that he rebelled against God’s command and reaped the results by never experiencing and enjoying a good marriage. So, in thinking about the passage with a theology of gender in mind, I was wondering if you had any insight to the fact that the wisest man in the world found a faithful man in a thousand but, though he had countless women at his disposal, did not find one woman in a thousand?

And how does that go along with Song of Songs?…

Elizabeth asks a very good question about that passage that closes chapter seven in the Biblical book, Ecclesiastes. It goes like this:

“Look,” says the Teacher, “this is what I have discovered: “Adding one thing to another to discover the scheme of things– 28 while I was still searching but not finding– I found one upright man among a thousand, but not one upright woman among them all. 29 This only have I found: God created mankind upright, but they have gone in search of many schemes.” (Ecc 7:27-29, NIV)

Scholars are split on whether the author of this work is Solomon. He identifies himself as Qoheleth in Hebrew: the preacher or, as in the translation above, teacher. As well, there is an additional interpretive layer of possibly two voices speaking in the book. Assuming that he did write it (and there are very good reasons to think so), we can see how the events of Solomon’s life, as Elizabeth hints, explain the words of this passage well.

The general point of Qoheleth is that people are not upright, right? All people. You can tell this by reading the whole chapter. After mentioning men and women in v28, he mimics the Genesis gender creation account of mixing singulars and plurals together. “God made man upright but they…” So, he is really bemoaning how hard it is to find a good person anywhere, man or woman. Solomon knew a lot of betrayal in his life.

But then, as Elizabeth points out, Qoheleth is indeed more negative about women than men. He could at least find one upright man in a thousand, but not one woman. (One has to wonder, if this is Solomon talking, if that one man was Mephibosheth, son of the incredibly upright Jonathan).  Why would he think less of women than of men, even if it is slightly less?

A lot here emphasizes the speaker’s own experience. Even the way the point about women is phrased, as an observation of what he could or could not find, limits its truth-claim. He also repeats the word, “scheme”, using it in v27 to describe his experience and then in v29 to condemn as humanity’s wrongful acts. He seems to be incriminating himself and his scheming here. This is especially clear if you read the verse just before this passage:

I find more bitter than death the woman who is a snare, whose heart is a trap and whose hands are chains… (v26) 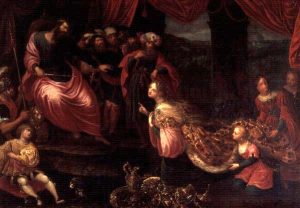 Qoheleth is speaking about bitterness in his own life. And I think Elizabeth’s hint is right. Solomon obliterated marriage by taking many wives and concubines. That resulted in his unanswered quest for righteousness in women. He could not know women correctly because he would not know one woman well.

This is usually the case in life. A man who beds many women instead of exclusively loving just one of them develops a great bitterness about women. He comes to mostly know the kind of women—and helps to make the kind of women—who indeed ensnare, entrap, and enchain (v26). And these men become quite bitter about their lack of rest. So in the experience of Solomon, or whoever is writing of this bitterness, we would not be surprised to find a skewed view of woman. 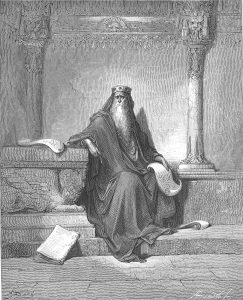 Lastly, Elizabeth asks how this goes with the Biblical book, Song of Songs? Well, if that book also arises from the court of Solomon and the voice of one of his wives, we are hearing in it an impassioned plea for the ideal of marriage in a situation that is tragically distant from it. She begs for an exclusive love, apart from the daughters of Jerusalem (read, harem). But sadly, that ideal was not what she got. Perhaps here was one woman in a thousand whose upright heart this sad king unfortunately overlooked.