Great Britain is ‘great’ in many ways. One way it isn’t, though, is being greater than America in the disintegration of gender. The book, Transgender (Talking Points series), by Vaughan Roberts, which came out in 2016, reflects this greater experience. A good little book in 75 pages, it does not try to answer everything but offers an Christian understanding of gender dysphoria from a Creation-Fall-Redemption framework.

This is a helpful way to approach the matter for people whose head is swirling and just want to get some kind of handle on how to understand it. Rector Roberts, of the Church of England, writes with a steady and compassionate tone, as when he critiques both the “Yuk!” and “Yes!” responses to people trying to change their sex (p19). That is a needed and most welcome balance for anyone putting forth a Christian answer.

The Oxford rector‘s grasp of the medical dimension is sound (e.g., “The evidence of brain difference as a cause of transgenderism is far from conclusive.” Yes!), and in that discussion he quotes the likes of Mark Yarhouse and Paul McHugh, names you are likely to be familiar with if you have read anything at all about the subject as a Christian. But some of other statistics seem a little different, perhaps because they are from British sources.

The author takes us a little deeper, helpfully analyzing sex-change as a triumph of John Stuart Mill’s self-determination: “Over himself, over his own body and mind, the individual is sovereign,” (p27), and recognizing the resurrection of Jesus Christ as a “massive affirmation” of the importance of our bodies (p57). Also, he makes good use of 2Corinthians 4:11, how the apostle teaches that we are given over to death that His life may be revealed in our mortal bodies (P61). Bravo.

Some absences stand out to me, like how most transgender folks are motivated, not by gender dysphoria, but by a quest for sexual arousal (p17), and the factor of culture as a contributing cause for gender confusion (p19), but these don’t subtract much from the book. If someone needs a quick and useful Christian take on gender dysphoria, this is a great place to turn. 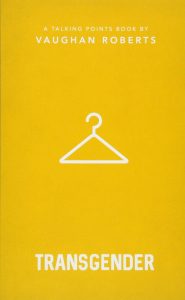 Other places, like Canada and Europe, are rushing ahead of us to minimize gender. America will have her own shape to the cultural clash, but we need to remember that we are not that special in this societal shift. England has gone ahead, and you could have seen that lead just by watching some of the British exports to America, like Monty Python episodes, just a few decades ago.

As my own daughter prepares to jump the pond next year to study in Oxford, it is great to know that thoughtful pastors over there are thinking steadily and faithfully about what is going on.