I, Mary K. Carter, was not expecting a proposal.  Sure, I liked him, but there were so many red flags.  We met at a Sixties costume dance.  Sam, who was a street musician, did not need to wear a costume, because he already looked the part.  I was an artist, recently converted to Christianity.  I craved stability, which Sam did not appear to be offering.  Plus, I had not met his parents.

I was starting a new temp job that morning at a special effects prop workshop.  Sam showed up at my apartment early that morning.  “We have to go,” he said.  “You will need a nice dress, a raincoat, and this teddy bear (which he had won for me at Coney Island), as a witness.”  Sam was learning to lead in our mission.  I thought we were going out for breakfast.

“You will get to work when you need to get to work,” he said.  But now we were out of the city.  We    stopped by the side of the road for a refreshing view of deer bounding up a mountainside.

“If only we could just keep going,” I said.

“That is just what we are going to do,” he replied.

I rounded on him. “Sam, did you get this from God, or did you talk to them (the prop shop)?”

“I asked them to give you the day off,” he smiled.  I later found out that my boss had said, “Well we are quite busy, but under the circumstances, I don’t see how we can say ‘no’.”

Well, we kept going…and going…and going. All the way to Niagara Falls!   Sam gave me a Bible Study he had written, and we talked about it.  (Listening to Sam preach is one of my greatest pleasures to this day).  Nine hours seemed short, because we were in love.  But still, I did not let myself guess what he was up to.  I just had not made my mind up about him.  I did not think that we were at the proposal stage yet.

We donned our raincoats to see the glorious Falls on the Maid of the Mist boat.

He asked me whether I loved him.  Now I am particularly close to my sister.  But I said the exactly wrong thing at that moment.  “I love you like I love my sister, only more …….”  I trailed off because Sam looked so crestfallen. 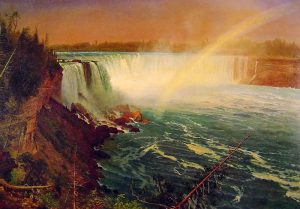 Nonetheless, he took me to a fancy dinner at the revolving restaurant.  I remember there was a buffet with lobster.  “Don’t get used to this,” Sam noted.

There, he presented me with a poem he had written, “Make a Mess in My Life.”  Sam resolved to love me even if I dropped the car keys down the subway grating, the sort of thing that would happen to me in those days.  I really should have known then.

Afterwards, Sam took me out in the dark on the Three Sisters Islands, to the farthest point you could go without going over the falls. In fact, if you slipped….  Again, he was leading in “the mission,” whatever it was, and I was taken with that. He brought a boom box to play Beethoven’s Second Symphony, a flashlight, and the teddy bear (for a witness).  He then told me that it was the end of an era.  Strangely, it started getting extra dark. It turns out, he had planned this trip for us to be at the best spot in North America for the exact moment of the 1989 total eclipse of the moon.   At the moment the moon passed into complete darkness, he asked me to marry him.  He had to get the flashlight out to show me the ring, which was an emerald.  And my answer was…. was…….

“What do you mean, you’ll have to pray about it?”  asked Sam, shocked. 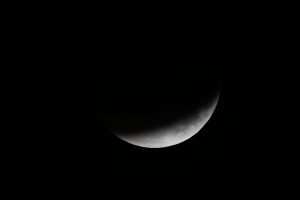 Did I go off and pray about it? No, swayed by the force of Sam’s leading and overwhelmed by this big production, I made a snap decision.

There were a lot of tears and then it was midnight and we had to immediately leave and drive back the nine hours to get me to work the next morning. Having achieved his goal, Sam fell asleep exhausted in the car.  As we drove through the night, I kept looking down at the emerald wondering what had I just done. I could give the ring back. Then, I did pray.  I prayed, “God, did I do the right thing?” It came to me. I would be a fool not to marry a man who would do all this for me.

Driving all night, we arrived back in Queens just in time and Sam dropped me off at my new job at exactly 9:00am.  That day, I kept looking down at the ring.  What have you done, Mary K. Carter? At 3pm, the tired time of the afternoon, a large vase of flowers was delivered, much to the amusement of my new coworkers.  This turned out to be a contingency plan in the mission, in case I had said “No.” Sam, had been too worn out to remember to cancel them.  The card simply read, ”Please reconsider.  Do you want to keep a name like Carter all your life?”

I laughed.   I had done the right thing.