It is fun to see the ways Jesus loved women, emphasizing their equality, all the while upholding the asymmetry between the genders. It makes me want to honor women likewise,

While he was still speaking to the people, behold, his mother and his brothers stood outside, asking to speak to him. But he replied to the man who told him, “Who is my mother, and who are my brothers?” And stretching out his hand toward his disciples, he said, “Here are my mother and my brothers! For whoever does the will of my Father in heaven is my brother and sister and mother.”

See the gender inclusion of Jesus? The words, “mother” and “sister,” mean that women were included in the reference to “disciples.” Matthew sometimes uses the word, disciple, to mean the Twelve Apostles, but also sometimes broadly, to mean anyone committed to following Jesus, e.g., Matthew 13:52, 27:57, 28:19). 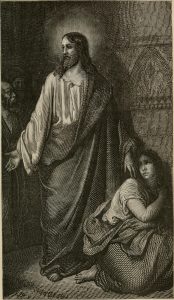 And here, describing this scene, Matthew remembers Jesus stretching out His hand, including the women there in His “family.” Following Jesus’ lead, Matthew calls these women disciples.

Do you see Matthew’s picture? These womeon are sitting at the Christ’s feet just as the men are. They received crucial instruction, right along with the men, such as about Jesus’ coming resurrection (Luke 23:55f with 24:6-8).

This passage teaches us to read the Bible always keeping two of its major gender principles in your mind at the same time: Equality-and-Asymmetry. The equality of the image-bearers. The asymmetry in their calls on how to love each other. As you read, you will find, over and over, the two right next to each other. So the two-term expression helpfully summarizes how the Bible understands the genders.

Look at Jesus’ overall ministry. He had close followers who were women traveling around with Him and even financially supporting him (Luke 8:3). Jesus Christ is the first Jewish leader we know of to have women disciples. This would be especially striking when the group showed up to Jerusalem for the Passover, as they did several times. As Ben Witherington puts it, those who read “Josephus’s Antiquities [the standard work of history from Jesus’ time, from which we get most of what we know about 1st century Palestine] from cover to cover will search in vain for references to female followers of the Pharisees, of Judas the Galilean (or the other Zealots), of Honi the Circle or of Hanina Ben Dosa.” In other words, Jesus was radical in the way He treated women as equal to men. At the same time, Jesus chose only men for the apostolate, the twelve authorized leaders of the early church. Once again, He treated the genders with equality and asymmetry.

Can we do the same in our churches?