The following is an excerpt from enGendered, one of the “Scenic Overlooks.” This one opens the book.  The idea of these is to try and guess while you are reading what Bibilcal passage is being imagined, before the last line. If it completely throws you for a loop, don’t worry–I’ll explain it after:

I was racing faster than the speed of light, if you can imagine that.  Maybe you can’t. But I was. It was moments after the unveiling, the explosion of His Big Idea. It was so long in planning between us. I had His blueprint, but blueprints are one thing. Actually building it, making it work in space and time, well, that is where I came in. I was in my element, begotten to go out. I sped forth fresh, as if in well-worn jeans and leather boots at a sunrise work site. 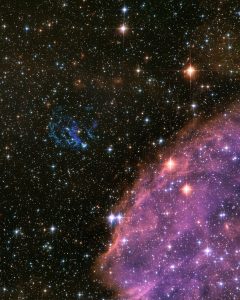 I first set the expansion rate to fifty-five places, sighing deeply. In fact, I actually purred, visualizing His reaction to this law of the heavens—large enough to dispel cosmic lumps but small enough to keep things interesting. I didn’t have to turn around. I knew His thrill. I paused to ponder, should I, might I, make the constant 0.0000000000667122? A flick of my wrist could diminish it to that last one twenty-two. What swirls would result! A glorious arrangement! I turned to look at Him, my One. He needed only to raise what you might call one of His eyebrows. It was enough. He did not approve. He cared about hotter stars for plenteous heavy elements. It was important to Him. So it was important to me. I laughed a final forty-eight to the wind and zoomed off in another direction. I will be His delight. That matters more to me than a few decimal points.

I knew what He wanted, drawing a circle on the face of the deep. I cartwheeled across what you would one day call the Lynx Supercluster, as I made it gorgeous and deadly. Most of my galaxies in it would be elliptical, like us. These bursts were not places fit to visit, but necessary for the stage of creation’s crown. He spoke to me then—that is, what you might call speaking. It is somewhat nonsensical to speak of speaking then, before the waters that would make speaking possible. Rather, He knew into me, conveyed across unseen bonds of love. It was our own private language, precise and poetic at the same time, every phrase laced with layers of meaning and music. The gist of it was that He wanted more white dwarf binary stars. I knew why. He liked Fluorine, which, I quickly surmised, would end up useful for teeth. This was the only way to get it. I beamed in agreement. Yes, so many pretty smiles to come.

There would be work by the Tender, Who would follow me. But, for the moment what needed to be there for the march to habitation was in place. The count of baryons, the particle ratios, the supernovae frequency, the distances within the Milky Way, the binding of beautiful Pleiades, all my work. I so wanted this to be a place of rest for our feet, and now, as I surveyed it, I think I had done it. I turned once again to Him. He smiled in pleasure and desire, with a look that said, beyond the sadness that will come, He would always keep me near. I, Holy Wisdom, didn’t want to think about the sadness then. Then it was all fresh and beautiful and pure life. And they were coming, the biggest and strangest idea He ever had . . .

Are you totally confused? This was a meditation on Proverbs 8:12, 22-31. Jesus calls Himself Wisdom personified (Paul calls Him this also), calling forth the image of this Old Testament passage of Lady Wisdom as the “Workman” of God in creation. If Jesus sees Himself in this Proverbs passage, then it shows us interaction between the First and Second members of the Trinity as They work out the perfect Divine Will when creating the World.  It gives us a glimpse of the gendered working of the Persons of God, for the Second is feminine to the First (1Corinthians 11:3). This gives us a vision of gender before it came out in those made in God’s image. Did you guesss what the essay was talking about?