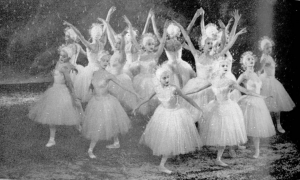 Every year, I have an argument with my husband about the value of The Nutcracker, the ballet composed by Pyotr Tchaikovsky and based on a story by E.T.A. Hoffman. Sam considers this holiday standard an insufferable time-waster having nothing to do with the real Christmas, a quaint costume drama that devolves into an interminable and inexplicable glorification of candy and tulle.

But, I plead, don’t you see?  The Nutcracker is actually a prince imprisoned in wooden flesh.  In a childish imitation of the Virgin, Clara receives the doomed doll into her little maternal heart. All the little girls exult with her and hold up their new dolls as well.  “See, I have gotten a child!” they pantomime.

But Clara is assailed by that thoughtless representative of all bad brothers everywhere (and all unenlightened males who refuse to appreciate this ballet): Fritz, who breaks the little wooden man. My nine-year-old son delighted in playing that role, which involved a lot of choreographed naughty behavior. 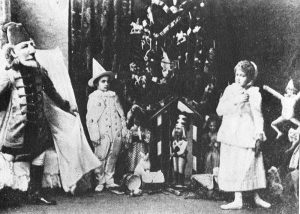 That night, under an ominously enlarged Christmas tree, the forces of evil, martialed by the fearsome and oversized Mouse King, rise up to destroy the beloved community of toys. (Mice costumes are stuffy, but you get to wiggle around, get shot in the butt and die dramatically).  The red-cheeked, stiff soldiers, who look suspiciously like twelve year old girls from Level Four class, are sadly no match for the lithe rodents.  The battle goes badly, until the Nutcracker appears as a champion.  But that is not enough.  The Mouse King prevails. It looks as if the hinge-jawed hero is done for. Just then, Clara overcomes her fear and throws her shoe, a gesture of support which should not really make a difference. Yet as a dreamlike symbol of her dedication to fight against darkness alongside her man, it turns the tide. 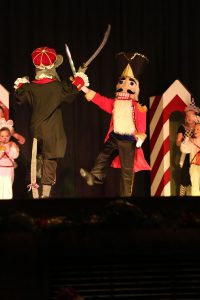 But wait! The Nutcracker is fatally wounded. No, he is rising again.  And he is no longer an ugly doll but a prince. To the strains of angelic singing, (I always cry, when I hear that part) Clara is swept away through the sparkly swirl of young trainees flitting dreamily through their first “Snow” ensemble to the magic kingdom of the Second Act, which is like Heaven explained to a little girl:

“Will there be toys in heaven, Mommy?”

In the realm of the Nutcracker Prince, there are a kaleidoscope of cavorting toys, multicolored multicultural sweets, waltzing flower petal dresses, and the attentions of a vague boyfriend figure. But not much drama. That is because it is difficult, even for Dante, no less Hoffman, to imagine Heaven and the consummation of all things, let alone explain it to a child. The second act’s plot is undeveloped, but the images are mesmerizing. 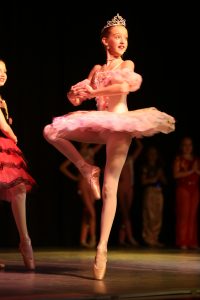 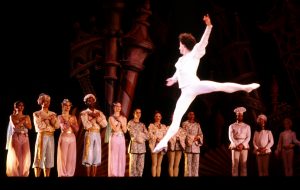 The Nutcracker, like all good love stories, is a childish pantomime of the great romance with Christ. As Paul says of marriage: “This is a great mystery, but I am speaking of Christ and the church” (Ephesians 5:22). So if you tear up, as I do, when the children’s chorus signals the passage through the snow, to the kingdom of the longed for prince, that is because the heavenly realm is real.  This may be hard for us to imagine, here where we are surrounded by giant rats and must throw our ineffectual shoes at the darkness.

“I am scared to die, Mommy.  Will it be hard, going to heaven?

“Yes, hold on tight to the sleigh and pray.”

The fact is that the Marriage Supper of the Lamb is coming in the next act.

How do you feel about The Nutcracker?